Salvia divinorum is a plant native to the forest of Sierra Mzateca, a mountainous area belonging to the mountain range Sierra Madre de Oaxaca in northern Oaxaca, Mexico. Sierra Mzateca is named after the Mazatec people, who are indigenous to the area.

S. divinorum have psychoactive properties; the leaves contain opioid-like compounds capable of inducing hallucinations. For those seeking this effect, the leaves can be chewed, smoked or ingested in the form of an infusion. The effects are rapid in onset and do not last long.

The chief active psychoactive constituent in S. divinorum is a diterpenoid named salvinorin. This diterpenoid, which is structurally unique, is a potent κ-opioid agonist. The psychoactive mechanism of the plant wasn’t identified until the 1990s, by a team led by ethnobotanist Daniel Siebert.

We still do not know much about the toxicology of S. divinorum or the possible health impacts (positive or negative) of long-term usage.

Common names in English and Spanish 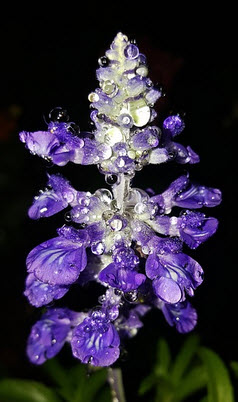 The S. divinorum plant grows in shady and moist locations, typically in black soil along stream banks. It is found in both primary and secondary cloud forest, and also in tropical evergreen forest. Its native range spans from 300 metres to more than 1800 metres above sea level.

It can become over one metre tall. Just like the other members of the mint family, S. divinorum have hollow square stems. The leaves are big. The flowers are white with violet calyxes.

Interestingly, the native plants chiefly reproduce vegetatively and only rarely produce vialble seed. Because of this, speculations have been raised about whether S. divinorum is a hybrid or the result of artificial selection.

There are two commonly cultivated strains of S. divinorum which are known to be distinct and are fairly well documentet.

One example of a more rare and less documented strain is the Luna strain, which was collected from a patch of S. divinorum growin in Hawaii. Plants belonging to this strain have unusually serrated leaves that are rounded rather than ovate. Some researhers believe that the Luna strain developed out of the Bunnell strain.

Salvia and the Mazatec people

Mazatec shamans have a long and still continouing tradition of utilizing fresh leaves from S. divinorum for religious and spiritual purposes, including spiritual healing sessions. It is one of several hallucinogenic species utilized ritually by the Mazatec.

Through syncretism, the plant has become seen by the Mazatec as an incarnation of the Virgin Mary and the ritual is nowadays typically started with an invocation to the Virgin Mary, the Holy Trinity and various saints. After ingestion of the leaf, the person stays in a quite place since, according to the Maztec shamans, “La María speaks with a quiet voice”.

Among the Mazatec, the plant is also used a medicinal plant for physical ailments, such as anemia, diarrhea, rheumatism and headaches.