Bear bread (Ganoderma applanatum) is a polypore, which means that it is a fungus that forms a fruiting body with pores or tubes on the underside. Polypores are also known as bracket fungi, and their woody fruiting bodies are called conks.

The mycelium of G. applanatum grows within the wood of living and dead trees of many different species and genera. The fruiting body – the conk – start out white but will soon darken to a reddish-brown shade, and can reach a diameter of 100 cm (nearly 40 inches). The conk is woody-textured and leathery, and can persist for many years, gradually growing bigger and bigger, and releasing spores multiple times.

The fungus is not beneficial to the tree; it is a wood-decay fungus that causes a rot of heartwood. It can also attack the sapwood (especially in older trees) if the moist content is sufficient. Bear bread can cause or contribute to the death of a tree, and is a common cause of death for beech and poplar.

In English, Ganoderma applanatum is known under several different names, including:

Examples of trees where you might find bear bread:

Olive trees and spruce are typically only attacked if they are already sick or damaged due to other reasons.

Some artists use bear bread as a drawing medium. The fresh white pore surface is selectively rubbed or scratched with a sharp implement to reveal the dark brown tissue hidden beneath. With this technique, motifs can be created using lines and shading. The fungus is left to dry and the markings become permanent. 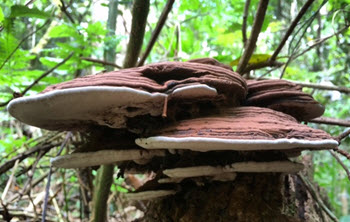 Bear bread is used to flavor certain Asian dishes. With its rich mushroom flavor, it is a popular addition to hot herbal soups.

When produce is to be fermented, adding slices of bear bread will increase the amount of umami in the finished product.

Fermented bear bread for sale in Asian markets have typically been fermented together with onions in lemon acid.

Ganoderma drinks can be created through either cold press in water or by blending the mushroom with liquid in a blender and then filtering the drink before consumption.

Bear bread is used in traditional medicine in both China and Japan. In Japan, it is known as kofuki-saru-no-koshikake which means powder-covered monkey’s bench. In China, the name is shu-she-ling-zhi.

In her book Gorillas in the Mist, Dian Fosse describes how G. applanatum is a popular food among the gorillas.