Ephedra sinica is native to Asia and has been used in traditional Chinese medicine for over two thousand years. Ephedra funerera is native to North America and was traditionally used by certain Native American populations. Later on, Mormon pioneers learned the benefits of the plant and started drinking an infusion of it simply called “Mormon tea”.

Six different ephedrine-type ingredients have been identified in ephedra, with the two most common ones being ephedrine and pseudo-ephedrine.

Ephedrine and pseudo-ephedrine have stimulative and thermogenic effects on the human body. Among other things, they stimulate the brain, make the bronchial tubes expand (which makes it easier to breathe), increases the heart rate, and constrict the blood vessels (which increases blood pressure).

What does thermogenic means?

Thermogenic = having a tendency to produce heat

The term is commonly applied to drugs that increase body heat through metabolic stimulation.

The thermogenic properties of ephedrine and pseudo-ephedrine is the main reason for their popularity on weight-loss aid products.

Examples of reported side effects of ephedra consumption:

It is important to take into account that the dosage and potency of active ingredients in dietary supplements can vary widely, not just between different products but also from batch to batch of the same product. Analysis of ephedra supplements have shown than many products do not contain the dose advertised on the package; the actual dose can be lower as well as higher.

Ephedra in the United States

In 2004, the United States Food and Drug Administration (FDA) banned the sale of dietary supplements containing ephedrine alkaloids. The banned was upheld by the U.S. Court of Appeals for the Tenth Circuit.

Ephedra extracts free from ephedrine are not banned and can be sold legally within the U.S.

Ephedra or ephedrine in sports 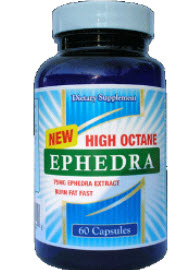 Ephedrine is listed as a banned substance by the International Olympic Committee.

Ephedrine is listed as a banned substance by The World Anti-Doping Agency.

In the United States, the National Football League banned players from using ephedra as a dietary supplement in 2001, after the highly publicized death of Minnesota Viking’s offensive tackle Korey Stringer.

In the United States, ephedra is banned by the National Basketball Association.

Ephedra sinica is a plant species native to parts of Russia, Mongolia and China. In Russia, it is found in Buryatiya and Zabaykalsky Krai; two Siberian regions along the Mongolian border, and the plant also grows in Primorye Primorsky Krai in Russia’s far east region. In China, E. sinica has been observed growing in the following areas of north-eastern China: Gansu, Hebei, Heilongjiang, Jilin, Liaoning, Nei Mongol, Ningxia, Shaanxi, and Shanxi.

Ephedra funerea is a plant native to the Mojave Desert of California, Arizona and Nevada in the United States. The scientific name is derived from the Funeral Mountains in the Death Valley National Park. In English, the plant is known as Death Valley Ephedra and Death Valley Jointfir.

Native Americans in the region have a long tradition of making infusions from the this plant, and this practice was also adopted by Mormon settlers.

Ephedra funerea is a shrub with tiny leaves. The twigs grow erect and shifts from gray-green to gray and cracked as they mature. Male plants produce pollen cones, female plants produce seed cones. Both types of cones are small.