Amanita muscaria is a mushroom containing the psychoactive compound muscimol. In English, this species is commonly known as fly agaric or fly amanita.

It is difficult to cultivate fly agaric on a commercial scale, due to its mycorrhizal (symbiotic) relationship with the roots of certain forest trees. 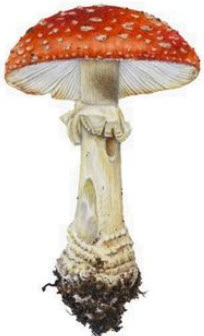 With its characteristic and eye catching look – the big cone is usually bright red with white spots – A. muscaria is arguably one of the most iconic of the toadstool species.

Fly agaric is a basidiomycete muschroom native to temperate regions of the northern hemisphere, where it grows in boreal ecosystems. Today, the mushroom is also found in parts of the southern hemisphere where it has been introduced by man, usually as a symbiont with pine or birch.

Amanita muscaria contains several biologically active agents, including ibotenic acid which is a neurotoxin that serves as a prodrug to muscimol. When a human ingests ibotenic acid, roughly 10%-20% will convert to muscimol which is more toxic.

The amount of ibotenic acid in a muschroom cap vary depending on several factors, including region and season, so guessing the potency of a specific cap is difficult. Generally speaking, spring and summer A. muscaria mushrooms will contain several times more ibotenic acid than autumn specimens.

Deaths caused by A. muscaria ingestion are exceedingly rare, partly because you normally need to ingest many mushrooms to achieve a lethal dose and partly due to the efficiency of modern medical treatments for patients suffering from A. muscaria poisioning.

Drying the mushroom may increase its toxic potency, since the process facilitates the conversion of ibotenic acid to the more potent muscimol. Also, it is easier to ingest several dried mushrooms than several fresh ones.

Boiling the fungus and discarding the cooking water will at least partly detoxify the fungus.

In some parts of the world, including Siberia and Japan, A. muscaria is eaten. The dangerous toxins are water-soluble, so you can reduce the toxicity of the mushroom by slicing it thinly and boiling it in plenty of water until it is well cooked. Discard the water.

In Japan’s Nagano Prefecture, A. muscaria is salted and pickled.

Ingestion of A. muscaria can produce a wide range of psychoactive effects, and the mushroom has variously been described as:

Some users describe perceptual phenomena such as macropsia, micropsia and synesthesia after ingesting the mushroom.

A. muscaria intoxication is similar to Z-drugs such a Zaleplon, in that it produces CNS depression and has sedative-hypnotic effects, while also causing dissociation and delirium in high doses.

A. muscaria has been widely used as an entheogen by various indigenous peoples in Siberia. An entheogen is a psychoactive substance that induces a spiritual experience and is aimed at spiritual development. The term, which is Greek, literally means “generating God within”.

Research have shown that this usage of fly agaric as an entheogen was common knowledge among most Uralic-speaking peoples of western Siberian and of the Paleosiberian-speaking peoples residing in the Russian Far East. From the Tungusic and Turkic peoples of central Siberia, we only have a few isolated reports and using fry agaric as an entheogen is not believed to have been common among these peoples.

In western Siberia, only the shamans used A. muscaria. The normal way for them to reach a state of trance was through drumming and dancing, and ingestion of fly agaric was seen as an alternative, and less common, route. In eastern Siberia, the use of A. muscaria was not limited to shamans, and the mushroom was used both as an entheogen and as a recreational drug. One described method involves the shaman ingesting fly agaric and the non-shamans drinking his urine, thereby receiving the psychoactive ingredients expelled by his body. It is possible that drinking the urine instead of directly ingesting the mushroom reduces the risk of negative side effects, but more research would be required to be able to say with any certainty if this is true or not. An alternative reason for this practice is financial; among the Koryak people of eastern Siberia, the person ingesting the mushroom is typically a wealthy person who has the required resources to procure the mushroom, while Koryaks of a lower economic status simply have to make do with the urine.

According to Lithuanian history professor Marija Gimbutas, fly agaric has traditionally been consumed at wedding celebrations in remote areas of Lithuania. The typical way of ingesting them was mixing mushrooms with vodka. Gimbutas has also reported that Lithuanians used to export fly agaric to Sami people who used the mushroom in shamanic rituals.

Various sources claim that fly agaric has been used among the Sami people for its psychoactive properties. Finnish historian T. I. Itkonen has for instance reported that Sami sorcerers in Inari (Aanaar) in northern Finland consumed fly agarics with seven spots.

In 1784, Swedish professor Samuel Ödmann suggested that vikings might have used fly agaric to induce their infamous berserk rages. (Ödmann knew about the use of the mushroom among Siberian shamans.) The theory of vikings using fly agaric became widespread, but no viking era sources have been found that collaborates the idea.

In 1979, Said Gholam Mochtar and Hartmut Geerken published an article about medicinal and recreational use of fly agaric in a group of Parachi-speaking people in Afghanistan’s Shutul Valley.1

The Crane Clan of North America

Ethnobotanist Keewaydinoquay Pakawakuk Peschel reported that fly agaric was used among her people, where it was known as miskwedo. Peschel was an Anishinaabeg Elder of the Crane Clan.